An emissary for peace 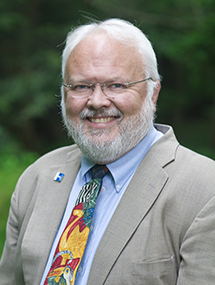 David Ives has dedicated his life to the promotion of peace. He’s served in the Peace Corps, was Rotary International’s Peace Forum coordinator, and since 2002 has served as the executive director of The Albert Schweitzer Institute at Quinnipiac University, which supports worldwide humanitarian efforts.

With these qualifications under his belt, it is not surprising that the two-time Ohio State graduate was a nominee for the 2016 Nobel Peace Prize. Ives, who earned Ohio State degrees in social work (’73) and education (’75), has fond memories of his time at the university and the ways it shaped his worldview. As a student, he served as a resident advisor, was a member of Ohio Staters, Inc., and volunteered anywhere he could. Ives said his educational experiences still resonate.

“My social work courses taught me to consult with communities before taking action and to be a good listener,” Ives said. “The biggest benefit was created by the professors who made me professionally and intellectually curious and reinforced my sense of adventure.”

Ohio State has not had a Nobel Peace Prize winner, but two alums (Paul Flory ’34 and William A. Fowler ’33) and a faculty member (Kenneth G. Wilson) have been recognized as Nobel laureates for contributions to the fields of chemistry and physics.

As Ives prepared for the Nobel announcement, he shared his thoughts about the prize, achieving world peace, and his work advancing the legacy of Albert Schweitzer, a scholar and recipient of the 1952 Nobel Peace Prize. The 2016 honor, announced in October in Oslo, Norway, went to Colombian President Juan Manuel Santos.

What was your reaction when you learned you were a nominee for the Nobel?

I was very happy and called my friends and family. However, as nice as it was, I knew that the competition would be stiff!

You were very involved as a student during your time at Ohio State. How did those experiences benefit you?

I was quite involved with many different things from being a resident advisor to volunteering at Triple S Settlement House. Being an RA helped me deal with conflict between roommates and these skills were not that much different from the skills needed for international negotiations that I often take part in now.

We live in a time that seems increasingly divisive. In what ways can our country evolve and heal some of those societal divides?

Well, the more we talk about things that divide us in open and constructive manners, then we have a shot. What I mean by that is that making judgments about a candidate in two-minute sound bites or less is no way to educate our electorate to make good decisions about candidates or policy. I also think that everyone should have a gap year and live and study in another culture, preferably international.

Why is it important for you to continue to build on Albert Schweitzer's legacy?

I think that Schweitzer’s concept of Reverence for Life is a concept that can be utilized no matter what religion or philosophy that one holds or believes in. Schweitzer wanted us to look at each other and react the same way as one does when you are awestruck by the view.  If one looks at another human being like you were on top of a mountain, if would be very hard to kill them! Indeed, the word from the German that Schweitzer wrote in that we use to mean reverence usually means awe. Schweitzer felt that this philosophy was his most important contribution to the world, more than his music, philosophy and medical work.

Which accomplishments you've made at the Schweitzer Institute are you most proud of?

When I first arrived at Quinnipiac, some faculty said that I would fail, that QU students were too professional- and career-oriented to ever want to spend their spring or summer breaks on humanitarian service trips. Now, four to 500 students apply for the various trips we have annually, and close to 2,500 students have gone on sort of trip either humanitarian in nature, or to Summit meetings of Nobel Peace Prize Laureates that have been held in Rome, Hiroshima, Paris, Berlin, Chicago, Warsaw, Cape Town and Barcelona.

Ohio State and the Nobel Prize