Buckeyes in the reef

Australia's Great Barrier Reef is the largest living reef in the world — and because of climate change, more than half of its coral has died in the past 20 years. Ohio State students traveled to the reef for nearly a month of research.

Kelly McCurry was snorkeling over a bustling reef full of fish, color and life when she looked to her right to see an abandoned, bleached patch of coral that, not too long ago, was thriving.

McCurry, who is studying forestry, fisheries and wildlife, was part of an interdisciplinary group of 40 Ohio State undergraduate students who spent nearly a month in Queensland, Australia. Near the Great Barrier Reef, they removed harmful algae from coral, learned about how human interaction affects the environment and saw tourism highlights of Australia.

The Great Barrier Reef system is the largest living reef in the world, covering nearly 135,000 square miles and visible from space; it's home to thousands of species of marine life. But climate change has threatened the once-thriving natural wonder. Warmer-than-normal waters have caused coral bleaching, which has killed half the reef's coral since 1985.

“I don’t know if I would ever have gotten another opportunity to travel to Australia in my life if it weren’t for this program,” McCurry said.

McCurry, who will graduate in 2017, said the trip complemented what she's learned in the School of Environment and Natural Resources. Her career goal: addressing the intersection of human culture and sustainability efforts.

“I’m so glad this is what I’ve chosen to study.” 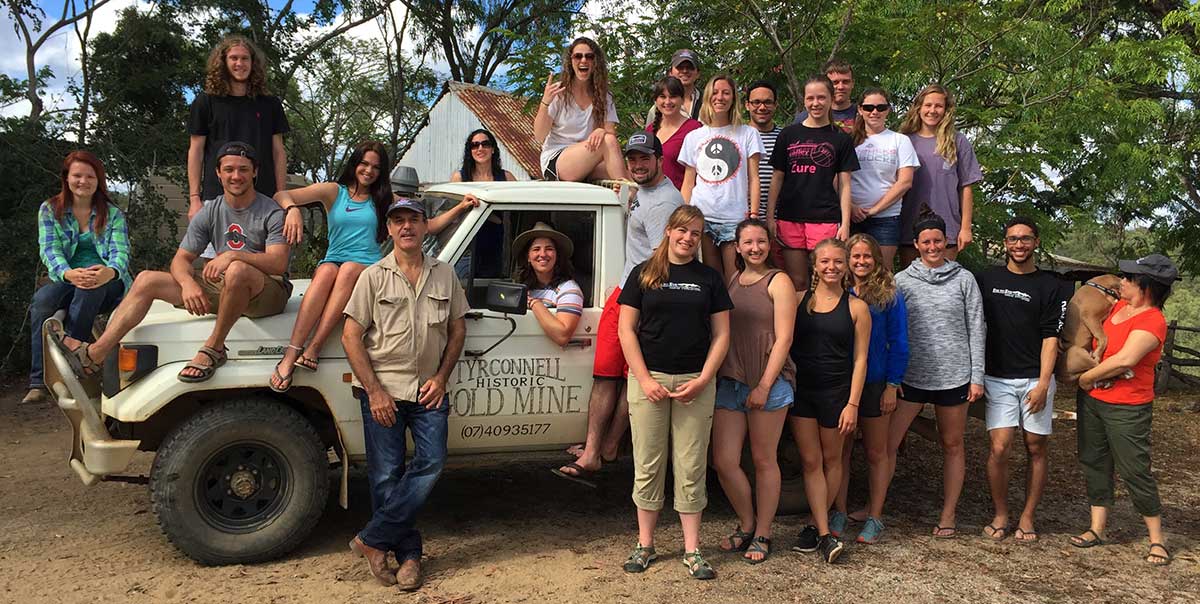 Lessons of a disappearing reef

Because of climate change and human interaction, the Great Barrier Reef is bleaching out and disappearing.

“Being out on the Great Barrier Reef, we saw extensive areas of once-live, beautifully colored corals that are now either white from the stress of high sea temperatures, or worse, they have died and surmounted to rubble," said Ohio State student Mason White.

White, an accounting major, is interested in the business implications of environmental issues: As the reef suffers, what happens to local industries such as mining, fishing and ecotourism?

At the reef, White, McCurry and their cohorts participated in two projects: In Arthur Bay at Magnetic Island, they removed 25 to 30 pounds of seaweed from the coral rock. Seaweed is a natural antagonist of coral, usurping land and sunlight. The project was the first of its kind done in the area.

Meanwhile, others studied implemented reef-zoning areas, where government has designated fishing, transportation and other human interaction off limits. The students snorkeled through the area, cataloging coral, parrotfish and invertebrates, to determine the health of various reef regions.

Back in Ohio after her study abroad experience, McCurry turned her focus from the Coral Sea to another body of water: Lake Erie. She is spending the summer at Old Woman Creek National Estuarine Research Reserve, where she is an environmental education intern, helping teachers plan lessons while surveying the muskrat population.

McCurry, who will graduate next spring, is eager to get back to campus in the fall — and says she'll continue to live the sustainability lessons she learned in Australia.

"My trip to the Great Barrier Reef was incredible," she says. “Coming back to Ohio State, I have already seen the changes in my daily behaviors and in those of my group members."

#OSUStories are about the distinct educational experiences of Ohio State students.