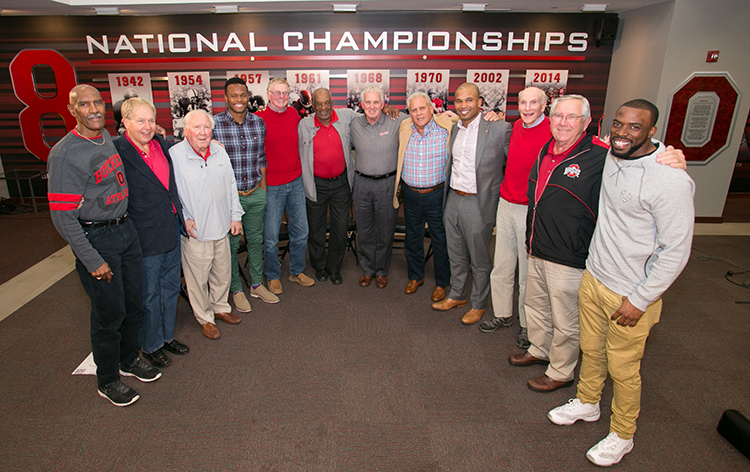 The former players took part in a discussion that is chronicled in the cover feature for the September-October edition of Ohio State Alumni magazine. That story gives you a close look at the players and provides keen insight into what they feel helped push their teams to championship glory. The evening resonated with the players, particularly the youngest champion, Doran Grant, who recalled watching the 2002 champions when he was 8.

"All that confetti came down and I was like, 'I have to do that one day. I’ve gotta do that,'" he said. "Thinking back to then, and now today, I never thought I’d be sitting here in the circle of greatness talking about being an Ohio State Buckeye, a champion Ohio State Buckeye.”

While many of these Buckeyes played in different eras, they were bound by their appreciation for the lifelong lessons they learned during their time on campus. Here's a glimpse of what they had to say:

I learned a lot from Coach Tress’ that is still a part of me. How to be disciplined, how to care about people, how to give back to your community, how to face adversity [and] be resilient. I now give that back to the communities I’m involved with in Pittsburgh and Dayton. And I never would have known that if Coach Tress’ didn’t take the time out to show me.

I’m gonna write a book too some day and then the title of it is Everybody’s a Coach, because I truly believe that whether you realize it or not, we’re all coaches to somebody. Maybe it’s a kid, maybe it’s a grandkid, maybe it’s a kid next door or something, but we're all giving of ourselves; it’s the old pay forward thing.

The better part of me is the better part of me because I had the opportunity to play football for The Ohio State University. I was a director of juvenile court for 30-some years before I retired, and the way I interacted with young people and their families was the kind of interaction that I recall Woody Hayes having with me or with my family. I wanted to be able to do the same thing as I met with kids and met with families. To say and do the right things and be the kind of person who set the right example.

Here are the players who participated in the championship roundtable discussion (from left):