My trials getting to the Olympic Trials

Every four years, the best swimmers in the United States descend on Omaha, Nebraska, to compete for a spot on Team USA and a chance to swim at the Olympic Games. Ohio State swimmer Cheyenne Meek had a journey to the trials that was as wavy as the pool she swam in once she got there. Learn more about Meek's journey to the trials in this first-person essay.

My heart pounded as I walked into the four-story arena crowded with the most elite swimmers in the United States, household names like Michael Phelps and Missy Franklin. Lights strobed. Music pulsed. More than 200,000 fans of every age, clad in red, white and blue, filled the air with their cheers.

Since I began swimming competitively at 9 years old, I’ve participated in over 300 meets. Not a single one comes close to matching my experience swimming at the 2016 Olympic Trials this summer in Omaha, Nebraska.

As I entered that arena, I knew it would be the first and probably the last time in my swimming career to compete at this level.

It was the biggest stage I’d ever been on in my life — an opportunity I was uncertain of just a few weeks before.

An injury becomes a nightmare

In January, a few weeks away from our conference championships, I started feeling a sharp pain in my left arm. I didn’t think anything of it at first because aches are a normal part of being a student-athlete. However, as the weeks passed, the pain got so severe I wondered whether my arm would break.

An X-ray and bloodwork had failed to uncover the reason behind the pain. My trainers needed me to get an MRI and sent me to The Ohio State University Comprehensive Cancer Center — James because of the advanced technology available there.

Four hours after my MRI, I received a text from my trainer: “Hi! Call me ASAP!!”

The talk that followed was a nightmare I never saw coming. Not only was my season over, but I had a boney lesion on my humerus.

It was so abnormal my doctors feared it was cancer.

Officials in Omaha paraded us down the hallway behind the pool minutes before my race. I fought to hold back tears because I was so overwhelmed with emotions. This was the moment I simultaneously feared and eagerly anticipated.

As I shed my warmups and placed goggles over my eyes, the spectators, officials and athletes disappeared. All I had to do was make it to the other end in one piece.

A whistle signaled to step up onto the blocks. In this moment, time stood still. The buzzer sounded, and I pierced the icy water.

An icy chill spread throughout my arm and the rest of my body as medical personnel at The James injected me with a tracing agent for a bone scan that could change my life.

Three hours later, after my body absorbed the tracer, I was alone in a room filled with high-tech machinery. I laid still on a hard table, staring blankly at the ceiling above me.

For 30 minutes, a large, ominous black plate passed inches over my body, trying to detect the tracer. If it attached to any other bone abnormalities, those areas would light up — indicating that I had cancer.

I repeated this phrase in my head as I willed my bones to be normal.

My results came back negative, with doctors determining the injury was likely a stress reaction. It kept me from practicing until the end of May — one month out from the Olympic Trials.

My coaches entered me in the meet at the beginning of June, but they had doubts about whether I would be ready for a competition of that magnitude. My trainer and doctor strongly discouraged me from racing because I could risk permanent injury. My parents were scared.

It was a difficult decision that was mine alone: Should I give up a once-in-a-lifetime experience that I had worked toward my entire career? Or potentially end that career by racing with an arm that wasn’t completely healed?

A triumph in Omaha

When my fingers touched the wall, I instinctively glanced up at the scoreboard to find my time.

Although it wasn’t the time I had hoped for at the Olympic Trials, I reminded myself to be happy considering the adversity I overcame. As I pulled myself out of the pool, I caught sight of my arm. I remembered what was on the line. 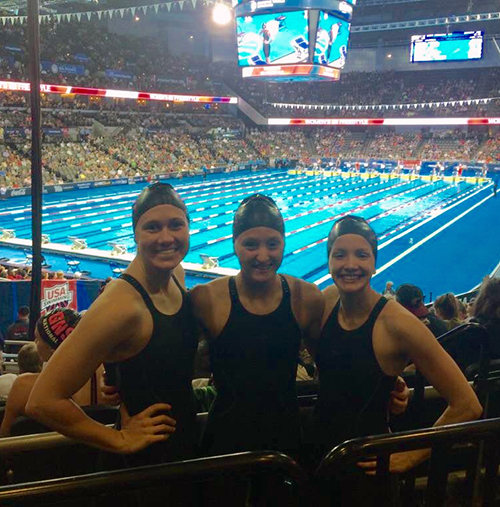 A smile spread across my face immediately because I had accomplished what so many people doubted was possible. I lived out my dream, and it felt amazing. Maybe I didn’t qualify for the Olympics, but I was proud of how far I’d come in 11 years and especially the past six months.

I now appreciate the importance of making the most of every opportunity because tomorrow is never a guarantee.

I also realized how essential a great support system is when times get tough. Without my family, coaches, teammates, trainers and Ohio State, the past six months would have been considerably harder. If I never came to Ohio State, it’s possible my cancer scare would’ve played out quite differently. My dream of racing in Omaha would’ve gone unfulfilled.

At Ohio State, I had access to world-class facilities both medically and athletically, which allowed me to receive the best treatment when I was in need.

Although competing at the trials was a dream come true, there is still more I want to accomplish in my two remaining years at Ohio State. The meet gave me a hunger to set even higher goals in swimming, but I also have a desire to inspire others to go after every opportunity, regardless of the obstacles.

Cheyenne Meek is heading into her third year at Ohio State and majors in strategic communication, and plans to compete for the Buckeye swimming team this coming season. She also spent a portion of this summer interning with Ohio State's Advancement Career Exploration program.

#OSUStories are about the distinct educational experiences of Ohio State students.