Joe Burger and Jarrod Barnes are demonstrating how student-athletes can succeed in all aspects of their college lives.

As the Ohio State Buckeyes prepare for a powerhouse showdown against Clemson in college football’s Final Four, some of the Scarlet and Gray are getting noticed for their accomplishments off the field. 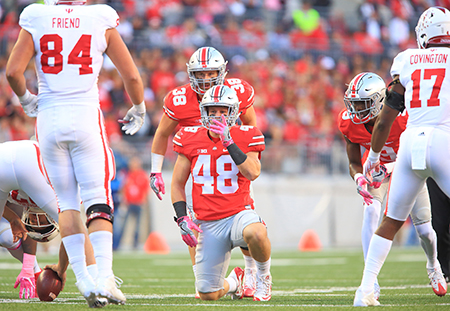 Ohio State football captain Joe Burger graduated from Ohio State this past December with a degree in industrial systems engineering.

On December 18, Burger joined 11 other Buckeye teammates in walking across the stage at the Schottenstein Center and receiving his diploma in industrial systems engineering.

Burger, a linebacker who had a storybook rise from being a walk-on to a team captain this year, said it was a surreal experience to finally hold his sheepskin.

“From my first day on campus June 18, 2012, everything had led up to that moment,” he said following his graduation high-stepping. “All of the hard work, all of the money, all of the books you read, it’s definitely a really cool moment. And now I’m an Ohio State alum, so that feels pretty good, too.”

Burger's success at Ohio State has not been limited to academic achievement and the football field. He's also worked as part of faculty member Matt Stoltzfus's "Finding Undergraduate Mentorship" program, mentoring two students as part an initiative designed to help incoming chemistry freshmen prepare for their first year of college.

He said achieving success in multiple areas requires the proper management of time and energy. “It’s so easy to get caught up in only one side of things. I came to look at it like it was a balance I needed to maintain in my life, so I didn’t tilt too far one way or another,” he said.

Meanwhile, Barnes said he had to change his mindset before he began to flourish academically.

“When I got into college, I was all about football and that was something that was reinforced by my peers. It was tough to break out of the dumb jock stigma, but as I began to be exposed to different things and meet with professors outside of class and begin to see them as people, I began to think outside the box.” 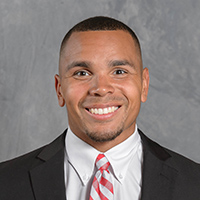 Both Burger and Barnes said the best advice they would give young student-athletes is not to be afraid to ask questions and get help from those who offer it. “You should never be too proud to humble yourself and listen to their experiences,” Barnes said. “I think that’s how you shorten the learning curve, and achieve your goals faster than you could on your own.”

Both players said Ohio State’s tutoring and support services provided by the program's Student Athlete Support Services Office play a key role for student-athletes who are struggling to balance the books with their athletic commitments.

While Barnes and Burger hope to have two more big football games in their future, they are already looking ahead to life after football. Burger has plans to take a few extra classes in preparation for the MCAT exam, which could land him in medical school, while Barnes is pushing forward on his thesis project — a mentoring and cultural enrichment program for student-athletes.

As they think about the future, Burger said he also is looking forward to taking on a more traditional alumni role when it comes to rooting on the Buckeyes. “I’m ready to be the best couch (football) coach in America,” he said with a laugh. “No doubt.”