The war that shaped history

On the 100th anniversary of World War I, a host of experts convened at Ohio State to look back at one of the most seminal conflicts in human history. 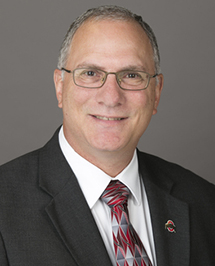 One hundred years ago, the world was in the middle of a global war that would change the course of history. While World War I is often overshadowed by more recent conflicts, many experts agree it’s had a significant impact on shaping the world in which we live.

“We can’t overlook the First World War, which was a major watershed in human history,” said Peter Mansoor, the General Raymond E. Mason Jr. Chair of Military History at Ohio State. Mansoor was a featured speaker at a recent national WWI symposium hosted on campus. The event, commemorating 100 years since one of the bloodiest years of WWI, examined various topics related to the conflict.

“Most universities in the United States don’t have a single military historian on their faculties,” Mansoor said. “We have, in fact, five military historians on our faculty and a three diplomatic historians as well. It is really a strength of our history program that we teach what many universities have forsaken, and that is the world as it actually works in terms of violence and warfare, human conflict, and also peace and diplomacy, and how to, perhaps, learn the lessons that can make the world better going forward.”

Mansoor said it’s important to examine World War I because it’s often overshadowed by other conflicts, including World War II.

“World War I vastly revolutionized war, actually much more dramatically than World War II did,” he said. “And it ended the first great period of globalization.”

The event’s keynote address was given by Sir Hew Strachan, a historian and professor at the University of St. Andrews in Scotland. Strachan said one of the main lessons to learn from WWI is why nations enter into war. World War I was sparked in 1914 by the assassination of Austria’s Archduke Franz Ferdinand. The conflict would eventually be fought between two sides known as the Entente and the Central Powers.

“Most countries in most wars enter the conflict for reasons that are inherently difficult to understand, often extraordinarily complicated and uncertain in their eventual outcome. And the First World War absolutely captures that,” Strachan said.

Jennifer Siegel, a professor in the Department of History, spoke at the symposium about financing the war. She said one estimate shows the war cost the allies $147 billion, while the Central Powers spent around $61.5 billion, in dollars not adjusted for inflation.

“It’s much more expensive to win a war than it is to lose a war,” she said.

Siegel said even the financial dealings of this war had an impact on history. She said a sour financial relationship between the Soviet Union and other nations led to tensions throughout much of the 20th century and contributed to the Soviet Union being ostracized.

From cannons firing on the Oval in the 1800s to today’s Veterans House, military and veteran students have helped shape The Ohio State University. Take a look back at this history through an interactive timeline. Read more