A dialogue that will endure

The discussion of women in STEM is changing the game.

Anne Booker has always been a proud female scientist. You don’t have to understand her research (the growth and survival of microorganisms in the fluids associated with hydraulically fractured shale gas wells) to know that she loves her work. She admits that working in a field dominated by men can be challenging sometimes. But as she sat in the Fawcett Center auditorium Tuesday evening, absorbing the powerful words from the speakers on stage, she grew more hopeful than ever.

Booker is working on her PhD in Ohio State’s Department of Microbiology. Bound by their gender and love for science, Booker and her female colleagues in the microbiology program support one another and get together outside the classroom. “We’ve decided that we need that,” she adds.

It seems appropriate that a recent outing for the group of young scientists was to see Hidden Figures, a movie about African American female mathematicians who worked at NASA during the Space Race. Booker says she and her friends were inspired by the film. And when she heard the author of the book was coming to Ohio State, Booker knew she had to go.

Ohio State’s been advancing the conversation through other recent events, including a Hidden Figures film screening for middle and high schoolers and a visit from activist Patricia Valoy, who focuses on the importance of diversity and inclusion in STEM fields.

The visit from Shetterly was another step in moving forward with the conversation. Her talk turned into a larger conversation about helping women, especially women of color, succeed in STEM careers.

“There are quite a few women working in technical fields now, and I think our idea of what a scientist looks like, this sort of Einstein-archetype, it means we’re still looking past the women who are already there,” she said. “I think once we kind of broaden our general perception to say that this is also what a scientist looks like, what an engineer looks like, I think then it becomes a little bit easier to recruit that next generation of women.”

Other speakers during the event included Damonique Thomas, an Ohio State senior majoring in computer science and engineering. She inspired the crowd with news about her new job with Google, which she’ll be starting after she graduates in May.

“I credit much of my success to The Ohio State University, and to the people and experiences I’ve had here. I can unapologetically be myself: a smart, African American woman engineer.” 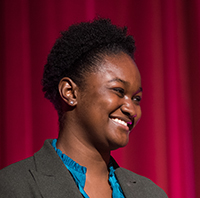 While women have made a lot of progress in STEM fields, there’s still more work to be done. Nationally, about 26 percent of all computer and mathematics professionals are women, and even fewer are engineers or architects, according to a 2015 federal report.

Ohio State can play a role in improving those numbers, said Mary Juhas, one of the other speakers during Tuesday’s event. Juhas is an associate vice president in the Office of Research and leader of Ohio State ADVANCE, which focuses on recruitment, retention and advancement of women faculty in the STEM disciplines.

“We have to really make sure it’s all hands on deck, and we can’t do it alone. We need everybody,” Juhas said.

An important step is collaboration and bringing together different people and departments to break down barriers, according to Wendy Smooth, an associate professor in the Department of Women’s, Gender and Sexuality Studies.

“Ohio State has an opportunity to be a leader in terms of diversity and inclusion around the STEM fields. When we build stronger pipelines for women and girls of color in STEM, we enrich the experiences of all our STEM-interested students. Because they are being trained in how to work in a dynamic workforce, which is the workforce they will enter into,” she said, “we change the nature of the game. And that’s what we do at Ohio State.” 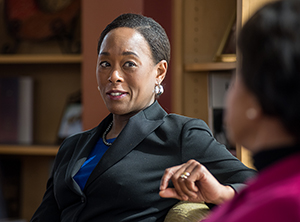 A unique program in the College of Engineering focuses on training men by encouraging them to be proactive supporters of women in engineering. The program, adopted from North Dakota State University, is called “Advocates and Allies,” and gives men tactics like how to talk with women about diversity and how to recognize inappropriate behavior. “The intent is really to allow men to put in play their good intentions,” said Rudy Buchheit, associate dean of academic affairs and administration in the College of Engineering. “Yes, we support our women colleagues. OK, so what do we do about it?”

Another program in the College of Engineering, called the Women in Engineering Program, fosters a supportive learning environment and culture within the college and works to introduce girls to engineering opportunities.

While there’s still a lot of work to be done, Ohio State leaders hope these efforts will go a long way toward closing the gender gap.

Anne Booker, the PhD student, hadn’t heard about many of these efforts until Tuesday evening. She initially came because of her love for Hidden Figures, but left the event feeling more inspired and more excited than ever before.

“I have renewed hope,” she said. “I really appreciate and want to thank Mrs. Shetterly for reinforcing the importance of diversity in STEM and Ohio State University for hosting this event and providing hope for progress. I am very proud to be a woman in a STEM field."