Maggie Griffin, who graduates this spring, is a recipient of the very first President’s Prize. Thanks to her passion, ingenuity and problem-solving drive, Maggie will spend her first year after graduation changing the lives of schoolchildren around Columbus. 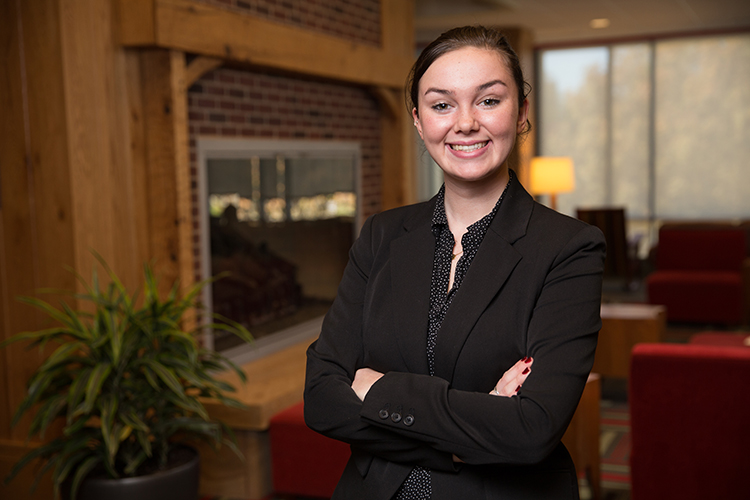 One winter evening, Margaret “Maggie” Griffin stopped in a nearby convenience store to grab a late-night snack after studying.

“I saw this family doing their grocery shopping for the week,” said Griffin, a 20-year-old senior in Ohio State’s College of Social Work. “That was their only source of food. It changed the way I thought about access and food. There were no fresh vegetables or anything.”

It might have been a routine trip to the store, but instead it put a face on an issue that Griffin had been wrestling with as a social work student: the need to alleviate food insecurity, namely food deserts -- low-income areas where residents lack access to nutritious food. She wanted to help.

Griffin did not let the experience in the convenience store linger lazily in her subconscious. She put her conviction to work and created the Unity Fridge Program, a food-sharing system that aims to replenish food deserts by bringing garden-fresh produce to children in Columbus elementary schools.

Her proposal for the project won Griffin the President’s Prize and its $100,000 of startup funding, created by Ohio State President Dr. Michael V. Drake to spur students to develop ambitious initiatives that will help transform communities.

Through the financial support of the President’s Prize, Griffin's idea will bring nutritious food to Columbus schoolchildren, amplifying her idea and impact beyond graduation and the Ohio State classroom. Griffin saw a problem in the community and connected her passion to purpose with a plan to fill the gap of food security for Columbus residents.

Half of the award will be used for project implementation. The other half will provide a year’s worth of salary for Griffin, who will be considered an Ohio State employee after she graduates in May.

Griffin's prize funding, which also starts in May, will go toward purchasing outdoor refrigerators that will be placed near five local elementary schools and stocked with fruits and vegetables from a garden run by Ohio State students at the university’s Waterman Farm. Local community gardens will supplement the produce while students develop their garden, and a greenhouse will extend the growing season during winter months.

The program will serve 12 families per school who will be selected based on economic need.

“I wanted to serve the most vulnerable populations,” said Griffin, who was initially drawn to social work because she wanted to help people. Her time at Ohio State, however, has revealed the depth and complexity of her future career path.

“It’s not just helping people, it’s being their advocate," she said. "They are the experts on their own lives. We are just there to be a support for them.”

Griffin said she owes a lot to the College of Social Work for cultivating her strong sense of social responsibility.

“Those professors are not only with you in your class,” she said. “If you have an idea and want to push it further, they are there for you. They don’t just push you to read the book; they push you to go out there and start serving other people.”

Griffin’s research from an online social and economic justice class she took in the spring of 2015 laid the groundwork for her winning proposal. “(The instructor) pushed me in the right direction and would help me find resources and more research on the issue, which was great,” she said.

The instructor of that course, Danielle Smith, said Griffin’s program is a prime example of how classroom instruction can be used to create solutions to real-world problems.

“It’s really great that she didn’t just let it end there,” said Smith, who is also the executive director of the National Association of Social Workers Ohio Chapter. “She found a way to make it a reality.”

Griffin is familiar with taking action from classroom instruction. As a senior in high school, she started a preschool garden in her hometown of Madeira, a Cincinnati suburb, for a class assignment. “It was so cool to see them go out in the garden and snap peas off the vine and eat them,” she said.

Michelle Kaiser, Griffin’s faculty advisor for the Unity Fridge Program, hopes it will help the Ohio State students who farm the land develop a “connection to the production” of food and put their “passion to purpose.” An assistant professor in the College of Social Work, Kaiser connected Griffin to local resources such as Waterman Farm.

Kaiser admits she was initially reluctant to take on another project as an advisor, but Griffin really impressed her.

“I could tell that she was so inspiring, caring, compassionate and driven,” Kaiser said. “I could see that trickling through to all the people who get involved with this initiative.”

Apply for the 2018 President's Prize