Stepping up to serve

Ohio State student veteran gives back to her country, her community

Gretchen Klingler’s resume reveals a wide variety of experience, but there’s one theme she’s carried throughout her life: a commitment to serve. She served her country by joining the Air Force. At Ohio State, she customized her academic experience by studying anthropology and Arabic, then used her studies to serve Iraqi women. Outside the classroom, she serves her fellow student veterans, helping them navigate the often tough transition from military to civilian life. While her resume grows, her head doesn’t. When asked about her accomplishments, Klingler focuses less on herself and more on the people she’s connected with, and those who’ve helped her along the way. 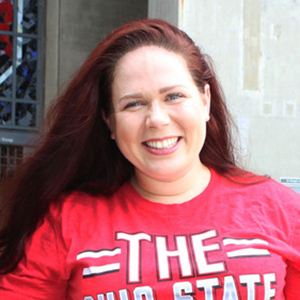 Klingler’s humility might have something to do with her humble beginnings in West Liberty, a village about an hour northwest of Columbus. Raised in a place that has “about three stoplights,” Klingler always looked for experiences beyond Ohio, even the United States. She was fascinated with other cultures. She wanted to see the world and experience life beyond Ohio. In 2009, she made a decision that would change her life. She enlisted in the United States Air Force.

Klingler eventually settled at the Defense Language Institute in Monterey, California. She spent 63 weeks in an intensive language course to learn the Iraqi dialect of Arabic, becoming an invaluable resource for the military at a time when they needed Arabic speakers. She wound up working in airborne intelligence, earning more than 300 hours of flight time while providing surveillance and reconnaissance for ground troops. Deployments took Klingler to Afghanistan, Djibouti and Iraq.

“The experience of being in the military is like nothing I can describe to people,” she said. “You always know you have somebody around that has your back. That comradery was something that spoke the most to me, knowing that the people I was standing beside believe in the same principles I did. They believed in liberty and freedom.”

During her six years in service, Klingler’s interest in other cultures continued to grow. After her discharge in 2015, she knew there was one place she could customize an academic experience, allowing her to connect her interests in anthropology and Arabic. So Klingler came back to Ohio and enrolled at The Ohio State University, where she became the university’s first undergraduate student ever to be named a Tillman Military Scholar.

Connecting with the community

Soon after coming to Columbus, Klingler connected with the university’s Global Mobility Project, an initiative that integrates arts and social sciences to examine why people leave their homeland and how they assimilate into new cultures. The program was a perfect fit for Klingler, whose study of anthropology allows her to dig deeper into culture, society and the people within it. Klingler received grant money from the Global Mobility Project to study Iraqi women who’ve come to the United States and the challenges they face with assimilating into American culture.

“The stories themselves are so powerful,” Klingler said. “I got that passion from when I was in Iraq and I saw what it’s like on the ground there. Some of it is painful — listening to how people had to leave everything.”

Klingler developed the research project with Jeff Cohen, a professor in Ohio State’s Department of Anthropology.

“Gretchen is one of the best,” Cohen said. “She brings maturity to the work she’s doing, especially with her experiences being deployed into Iraq. These are pieces that make her amazing to work with.”

Klingler’s focus outside the classroom is about helping her fellow student veterans. She’s president of Vets 4 Vets, a student organization that advocates for veterans on campus and connects them with resources like job placement. She’s also part of the Veteran Community Advocates program, which pairs student veterans with individual colleges and departments across campus.

“Being able to be around other student veterans just makes my Ohio State experience so much more amazing,” she said. “The community we have, the comradery we have. It’s a really incredible experience.”

Klingler hopes her work, and the efforts of her student veteran colleagues, will cement Ohio State’s reputation as one of the best schools in the country for veterans. Klingler works closely with the university’s Office of Military and Veterans Services, which oversees resources to help veterans transition from military life to campus life.

“She really has her finger on the pulse of the veteran community, and it is very valuable to us,” said Michael Carrell, assistant vice president and provost of Military and Veterans Services. “We use her feedback, and that of her Vets 4 Vets and Veteran Community Advocate teammates, to enact change at Ohio State.”

She still has plenty of time to make an impact; Klingler plans to graduate in May 2019. In the meantime, she’ll continue her service — serving the Iraqi women by telling their stories of struggle. Serving her fellow student veterans by connecting them with guidance and resources. Selflessly serving others, while always staying thankful and humble.

“It’s been amazing to see the support I have here at Ohio State,” she said. “And the way that if I put my support behind someone else, I can help them shine as well.”