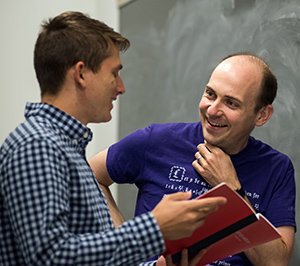 Jim Fowler wants you to love math like he does.

The Ohio State math professor has been frequently recognized for his innovative approaches to making the subject more accessible. Through online learning, virtual reality and sheer force of personality, Fowler is just one Ohio State faculty member who is taking a creative approach to teaching and learning.

Here are five things to know about one of Ohio State’s innovative faculty members.

1. He's part of a team incorporating virtual reality into teaching.

Fowler is working with a team of Ohio State researchers including project lead Chris Orban at The STEAM Factory who are exploring ways to use virtual reality to facilitate the learning process. Fowler and colleague Bart Snapp have created an app that allows the user to plot whatever 3D vector fields and surfaces they want in stereoscopic 3D on their smartphones. When used with Google Cardboard the app gives students a more visual way of understanding challenging concepts.

Bringing a high-energy approach to his videos, Fowler owns a math-oriented YouTube channel with more than 10,000 subscribers. These videos feature Fowler discussing and explaining a number of different math conundrums. Videos on Fowler’s channel have been viewed more than 1.8 million times.

3. He created the most successful online calculus course.

During the summer of 2013, Fowler created a Calculus One massive open online course that was made available through iTunesU. That summer, it had more than 150,000 downloads and 186,000 streams, making it one of the most popular courses on the Apple platform. The course is still thriving at available at mooculus.osu.edu.

Fowler’s TEDx talk “The Humanity of Calculus,” covered his desire to improve the teaching of calculus and make it more accessible for a broad range of students. His presentation focused on calculus’s backstory, the people who brought it to the forefront and how it can be used to better understand math.

Fowler and Snapp received an Affordable Learning Open Impact Grant from Ohio State. With their grant Fowler and Snapp are exploring moving a three-semester sequence calculus textbook online, something that could save students more than $250,000 in book costs.