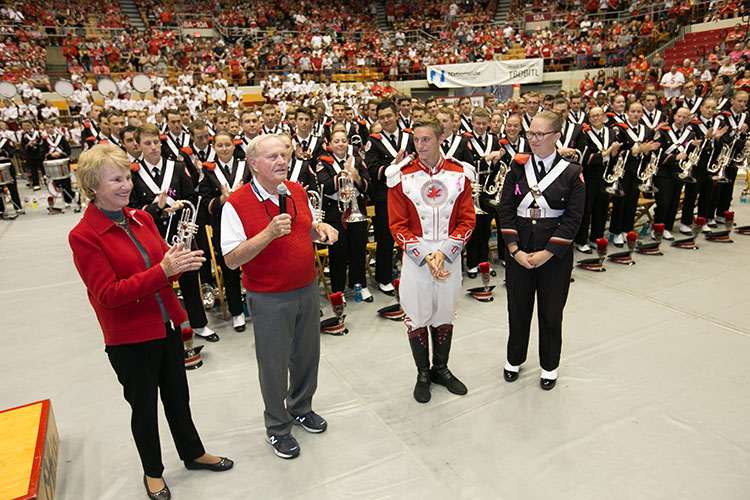 Jack Nicklaus remembers the first time he saw the Ohio State football team take the field in the Shoe. It was 1946, and Jack was just 6 years old. His father took him to the game so they could experience the crowds, the competition and the pageantry.

“I never missed another game until I started going to work about 15 years later,” Nicklaus recalled. “As far as I’m concerned, the band’s been synonymous with what’s gone on here at the university in terms of football. I always appreciated watching this great group come on the field. It’s sensational.”

More than 70 years later, Nicklaus retains close ties with The Ohio State University, the football team and the band, known as The Best Damn Band in the Land.

Before last fall’s homecoming game, Jack and his wife, Barbara, spoke to a packed house in St. John Arena during the traditional Skull Session.

“We both grew up in Columbus, so The Ohio State University and the marching band have been part of our lives forever,” Barbara said. “It’s fun to be a part of it.”

The Nicklaus’ were also on hand as part of their new role as honorary co-chairs of the 100% TBDBITL campaign, which aims to raise $10 million in endowed funds to support every member of the marching band with a scholarship. The university has pledged to match the first $6 million raised.

“We’re so thrilled to be helping,” Barbara said.

Meeting the goal will allow all current and future band members to receive an annual scholarship of at least $3,000.

“It’s allowed me to have a sense of financial relief,” he said. “To have a part of the stress minimized by the generosity of those who have come before is truly a blessing.”

Band members typically put in about 20 to 30 hours each week, which is on top of classes and homework, making it tough to find part-time work or paid internships.

“Every day I see how tirelessly our band students work, and I know the sacrifices they make to be a part of our tradition of excellence,” said Christopher Hoch, Ohio State’s director of the marching and athletic bands. “We’re unbelievably blessed to have so much support from our alumni and fans.”

If there are two fans who can help raise funds and attention to the cause, its Jack and Barbara Nicklaus. The couple have a history of charitable giving, which is often done through the Nicklaus Children’s Health Care Foundation. They started the organization in 2004 to provide families with access to world-class health care.

“We have a platform to be able to go out and open doors to help raise money and talk to people,” said Jack, who sees this fundraising campaign as yet another way to help an institution that holds such a special place in their lives.

“We’re Buckeyes. It’s that simple,” said Jack, who met Barbara during their Ohio State orientation more than sixty years ago. “We have five kids, 22 grandkids. We’ve been very blessed with ours, and we just like to see other people be blessed with their kids too.”

Learn more about the College of Arts and Sciences