Producing food that's out of this world 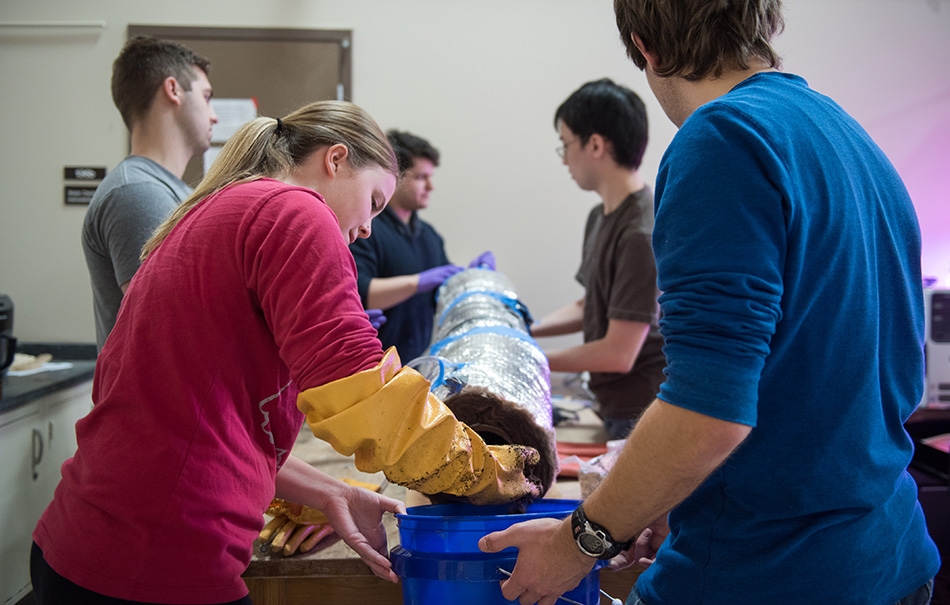 The students surround a long silver composting tube, extract the material, dump it into a bucket and carefully examine it, sifting the dirt slowly with their hands. The work isn’t all that glamorous. Passers-by don’t take too much of an interest, probably figuring it’s some sort of typical science project in the works. But in this unassuming corner of one of Ohio State’s academic buildings, there’s work being done that’s particularly interesting to one group of people — NASA. That’s because this student-led research has the potential to change space missions forever.

“If it works out, this could have some really big impacts,” said student Sam Diamond, one of the project’s team leaders.

Every year, NASA issues a call to universities across the country for research proposals. It’s part of the eXploration Systems and Habitation Academic Innovation Challenge, or X-Hab for short. For NASA, it’s a chance to tap into academic expertise as the space agency looks to create better systems and technologies for its missions. And as the missions get longer and longer – especially a potential trip to Mars – it’ll be critical that astronauts have ways to grow their own food.

Ohio State’s been lucky enough to win the research grant for the last several years. This year, they were one of just eight projects chosen to receive a $20,000 grant.

“We have a lot of freedom in terms of our design, what kinds of changes we want to make,” Diamond said. “I’ve really been enjoying the project overall.”

Diamond leads a diverse team of five engineering students who have expertise in both the food and biological engineering areas. His team is taking a plant substrate (essentially the material in which the plant grows), running it through a composter, and seeing if the substrate can grow new plants.

Another Ohio State team is researching how to use a 3D printer to make a substrate that can grow safe plants, while another project involves developing a test kit to ensure that produce grown in space with the reused substrate is safe to eat. Each school year, new team members join the project and continue the work from previous teams – a detailed, time-consuming process that requires a strong commitment from the student researchers.

“What we’re doing is figuring out the basics of how to create food in outer space where there’s no gravity,” said Ryan Jeon, an engineering student and member of last year’s project team. “There’s a bunch of other factors, like you can’t have flammable anything. So we have to be really smart about our strategy.”

Last year, Jeon and his teammates flew to Florida, where they visited NASA’s Kennedy Space Center to talk with scientists and learn more about how their work could impact NASA missions.

“Just to realize that my degree actually will help in creating this stuff that could actually be used by people in the future — it’s an amazing feeling,” said Usoshi Chatterjee, a student in Ohio State’s Department of Food, Agricultural and Biological Engineering who’s one of the project’s student advisors.

“We’ve been involved with this project and received the grant for many years,” he said. “The best part is seeing the excitement from the students. They’re really excited to be a part of this project.”

Diamond remembers the day Ling came in to his classroom to recruit students to join the project. Diamond’s always been interested in space and was itching to get some hands-on experience in a lab. The project was a perfect fit.

Learn more about the College of Food, Agricultural and Biological Engineering