Advice from a scholar

Ohio State's seventh Rhodes Scholar provides a primer on things to know as you embark on your college career. 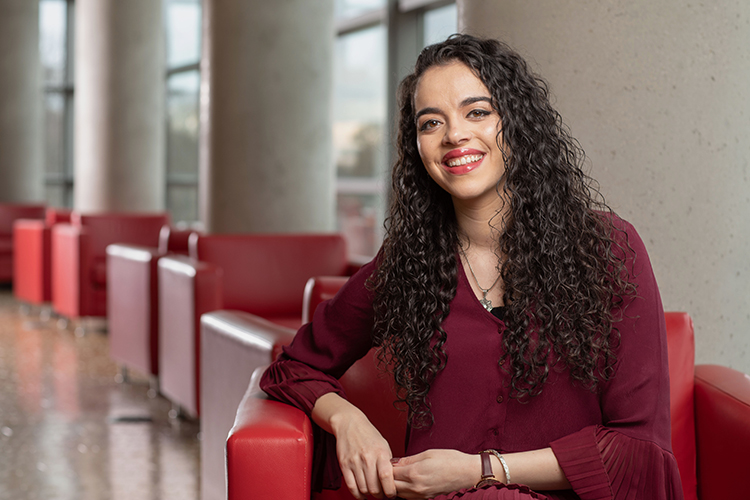 Laila Ujayli ’18 has a passion for supporting immigrant and refugee communities. She’s determined to find ways to use narrative to engage audiences on issues of international peace and security, with a vision of using screenwriting for movies and television to counteract negative representations of Middle Eastern refugee communities. As a Rhodes Scholar, Ohio State’s seventh, she’ll head to the University of Oxford in the fall to pursue degrees in refugee and forced migration studies and world literature.

As a recent graduate preparing to embark on a new adventure in academia, Ujayli has advice for college-bound high schoolers.

How should high school students think about preparing for college?

Strong reading and writing skills are going to be vital in whatever classes you take, and will always put you a step ahead. Also, keep an open mind. When you’re going to a large university like Ohio State, there are so many different paths you can take. Coming in with a set idea of what you want to do will limit what you can ultimately explore. 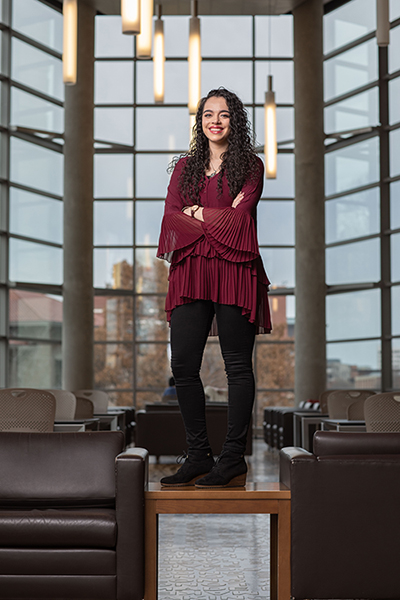 Laila Ujayli says the abundant opportunities were one of the best parts of her college experience. "When you’re going to a large university like Ohio State, there are so many different paths you can take."

What should you do if you arrive at Ohio State and you’re not sure what to study?

Don’t worry! A lot of people are in that same boat. Go talk to your advisor. Go talk to your professors. Even talk to professors who are in entirely different fields. Ask them about their research, about what they’re studying, and their passion is going to rub off on you. It might give you some guidance into where you want to ultimately study.

What are the benefits of going to a college the size of Ohio State?

You have resources that would not be available at a smaller institution, such as advisors to guide you. There’s a tremendous breadth of faculty, with extraordinary experiences and backgrounds, and they can get you excited and passionate about issues that you might never have heard of before.

What were some of the best opportunities that you encountered at Ohio State?

For someone like me, as a third-culture kid who has lived overseas for a period of time, and as an Arab American Muslim, sometimes it’s hard to find people who look exactly like me or who have my background. Not only was I able to find people I could relate to, but I was also able to meet people who were entirely different from me and engage with them in multiple academic and social communities.

How did your involvement in student groups enhance your college experience?

During my time here, I was in and out of the Muslim Students’ Association, which was a great way to find a community within Ohio State. I was also a peer mentor for the Arts and Sciences Honors Program. It was a great experience that gave me an opportunity to not only give advice, but also to hear it myself and continually reflect on my college experience and the ways I should shift my path.

If you were to do your Ohio State experience all over again, what would you do differently?

I would declare my screenwriting minor much earlier. I used to think pursuing creative writing, a hobby of mine, in an academic setting would suddenly make it stressful. I thought it wouldn’t be marketable in my particular course of studies in international conflict. In my junior and senior years, I discovered that all these problems are very connected, and that by pursuing issues from multiple angles, you have a more holistic sense of what the problem is and what the solutions will have to become. If I would have understood how my majors and minors were interconnected much earlier, I would have been less stressed and less filled with existential dread over whether I was doing the right thing.

What are three things you would tell an incoming freshman not to miss at Ohio State during their time here?

1. Take History of the Mongol Empire. It’s a great way to diversify your understanding of history.

2. The white chocolate mocha at Heirloom Cafe. It’s wonderful after an exam.

3. Be sure to attend at least one Michigan game. Being in a giant stadium cheering with your fellow classmates is such a wonderful experience and it really reinforces Ohio State’s culture of community.