A unifying moment, a lasting movement

Can’t Stop Columbus answering the many challenges of the COVID-19 outbreak. 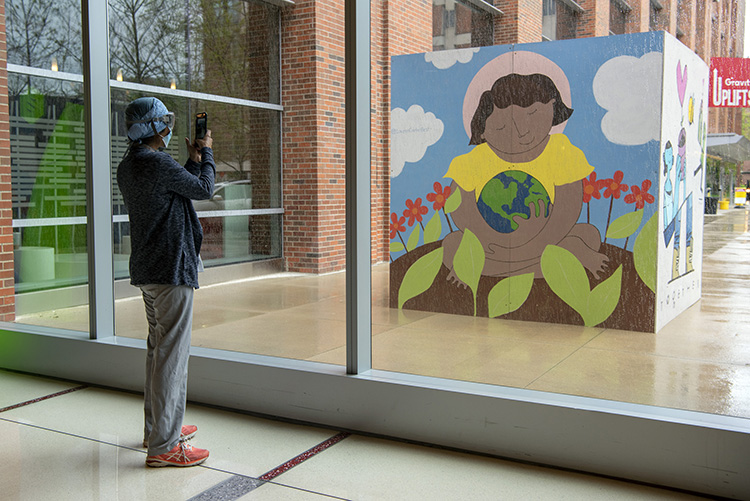 Meanwhile, across the city, a local musician is playing his version of the Gnarls Barkley song “Crazy” from the back of a truck as those in the neighborhood stand on porches and in driveways, listening and snapping pictures.

On this same day, or any day really, Ohio State students are sewing masks for health care providers. Fitness professionals are creating workouts for those cooped up inside their homes. Web developers are creating websites for projects that deliver foods, services and help to those who need it.

It’s all part of Can’t Stop Columbus, a SMART Columbus initiative that began in mid-March to help address the myriad challenges COVID-19 has inflicted on those in the Columbus community.

“The community is showing the best version of itself,” said Jordan Davis ’11, director of SMART Columbus. “People are trying to band together and give as much as they can to help our neighbors.”

Davis lit the match that sparked the Can’t Stop Columbus movement with a single tweet on March 15 in which she proposed virtual hackathons to create solutions for people during the COVID-19 outbreak. Within hours, many from Ohio State’s tech community were helping to give shape to a rapidly growing initiative.

“We realized pretty quickly it wasn’t going to be a one-day hackathon,” said Julia Armstrong ’14, Ohio State’s HackOHI/O director. “It was going to be a whole movement. Now, if the need has something to do with COVID-19, we’re probably on it.” 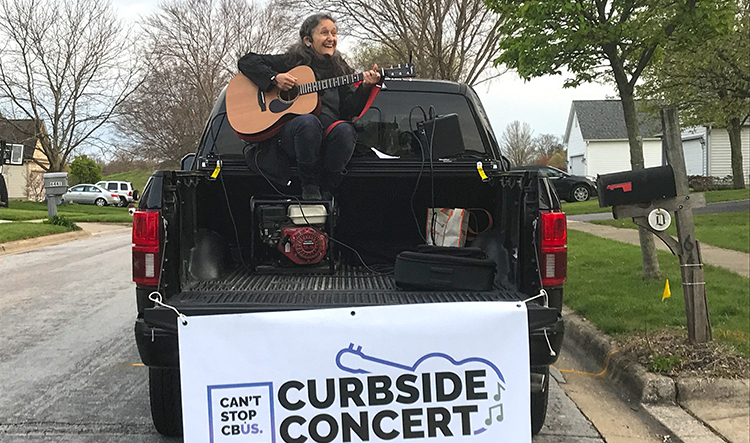 Curbside Concerts are just one of the more than 40 projects launched as part of Can't Stop Columbus's effort to meet a range of community needs generated by the COVID-19 outbreak.

In the first 24 hours, 150 people joined the movement. In the days that followed, hundreds of community members from every corner of Columbus were offering their expertise, money, time and resources muster.

Communicating through a Slack channel and a website platform created by Helm, an Ohio State student startup team, volunteers were brainstorming and creating projects to attack every conceivable COVID-19 challenge.

Now, the movement has nearly 1,500 volunteers, including about 300 Ohio State students, faculty and staff. The team has 45 projects in the works and has launched 15 projects.

Those projects have resulted in:

“People have come together from the corporate world, the tech world, startup leaders, students from across Ohio State, so many different backgrounds to address these problems,” said Jack Hutchinson, a junior marketing major and president of Fisher College of Business’ Business Builders Club. “Whether it’s a VP or employee recent graduate, people have brought a lot of positive energy to a situation that has been so negative.”

Hutchinson and Armstrong created one of the first Can’t Stop Columbus projects: Columbus Stays Active. It features about 20 area gym owners, fitness trainers, yoga instructors and dietitians sidelined by the COVID-19 shutdown sharing workouts and other tips for staying physically and mentally healthy. Nearly 500 people have visited the site. 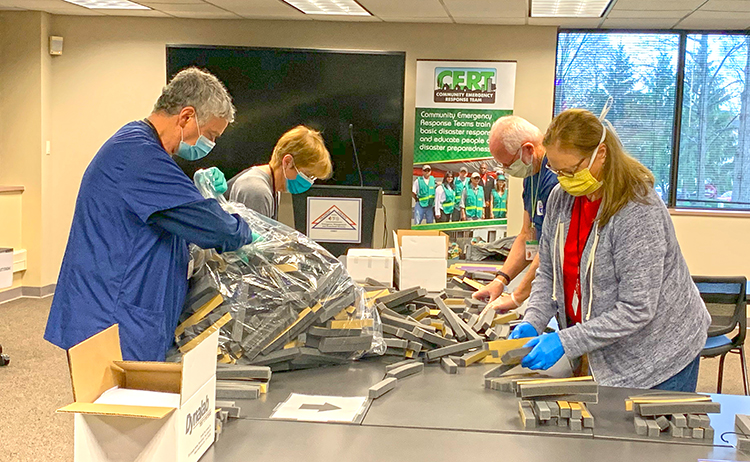 Can't Stop Columbus has been active in addressing the personal protective equipment shortage, and has rallied community businesses such as Dynalab to help produce and procure this important resource.

As part of the leadership team, Armstrong has been involved in many similar projects but has focused on PPE coordination: getting protective equipment made or donated to health care facilities, homeless shelters, nursing homes and similar facilities throughout Columbus.

“We have so many resources at Ohio State, from 3D printers to labs to expertise to industry connections to students willing to sew masks,” Armstrong said. “Everything we have here at Ohio State ripples out and benefits the whole community.”

Just as Armstrong got involved because of her ties to the hack community, so did the students who created Helm, which includes industrial design major Kai McKinney, history major Brad Browning, mathematics major Tommy Hillyer, physics alumnus Will Matz and finance major Austin Drabik-Weingard.

“We had just competed in MakeOHI/O and have been very involved in hackathons so this caught our eye and there was a lot of energy immediately,” Drabik-Weingard said. “What’s happened since isn’t something you get to experience at a job or anywhere else: mobilizing the community, launching projects that deliver food into the community, technical resources getting people up and running, structures being created. It’s nothing we could have anticipated.”

Drabik-Weingard and McKinney are both Can’t Stop Columbus organizers who have helped in many of the projects. McKinney helped the Columbus Foundation develop the idea for the Curbside Concerts and has worked with Armstrong on Can’t Stop US, a toolkit to help other communities launch their own movements. Dayton has already done so while Boston; Austin, Texas; and Cleveland have been in touch about starting their own.

“Ohio State has a culture of caring but also erring on the side of action and so many people from our community have done that,” McKinney said. “But then to connect with so many people from so many backgrounds within the Columbus community, it’s been heartening and inspiring to see that.”

And no one within the movement sees it ending when COVID-19 is over. In fact, Armstrong said it could go on for years to come.

“There are so many strains on our citizens,” Armstrong said. “We may get health care workers and supply chains figured out but the impact left on families and households isn’t going to go away. That’s why there’s so many projects focused on health and well-being, livelihood and job sites. There’s work this group will be doing for a long time to come.”