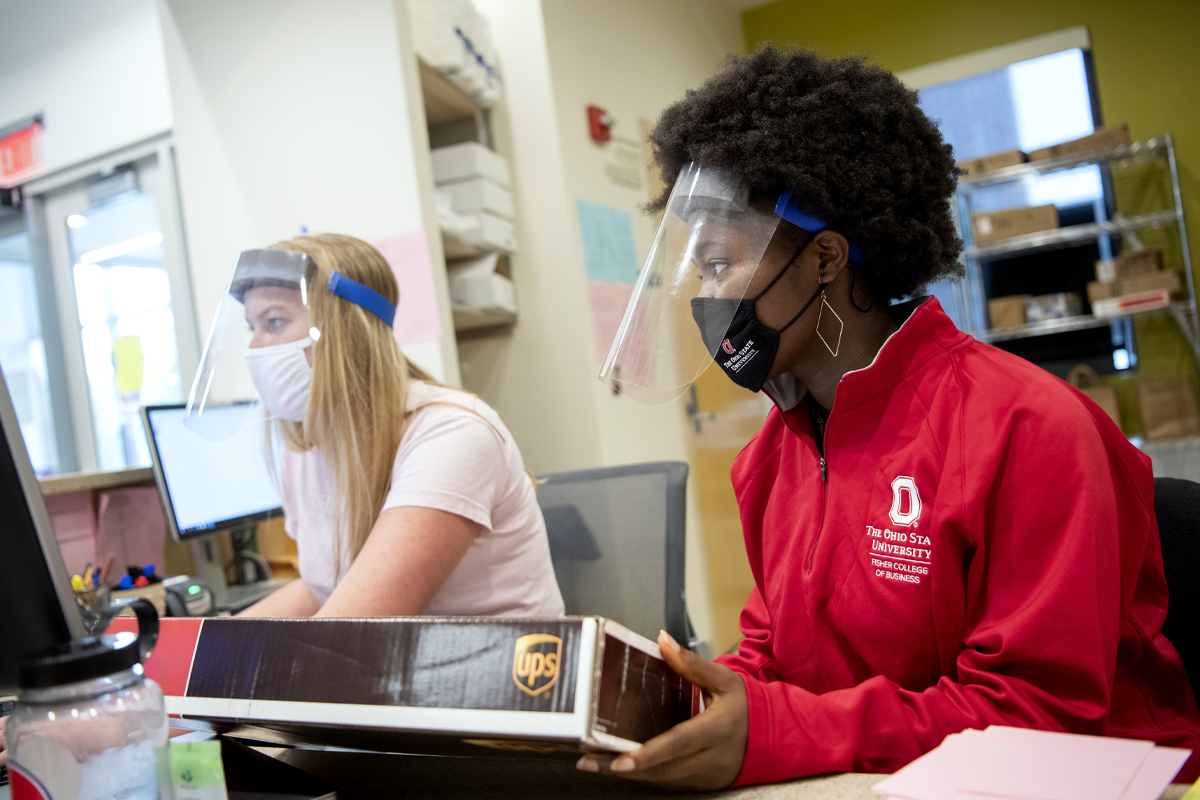 Faith Nimely, at right, is a senior accounting major and resident manager who helps students focus on their overall well-being.

Faith Nimely’s parents were understandably worried. They thought she should come home.

It was March and Ohio State had announced campus was closing because of COVID-19. Nimely, whose family lives 30 minutes away, was in her second year as a resident advisor (RA) for Raney House.

Instead of going home to finish the semester virtually, she chose to stay on campus to support the students who weren’t able to leave.

“I told my parents that I understand their fears, but that I have a good support system. Some out-of-state or international students don’t have that support close to them right now,” said Nimely, a senior accounting major who was promoted to a resident manager (RM) role this past summer. “Some of them are freshmen finishing out their first year."

Nimely and her RA peers quickly became a meaningful resource and allies for the Ohio State students who stayed on campus. Initially, they sent out a letter to residents to let them know they understood first-hand the range of emotions they were going through. Nimely offered her personal phone number for anyone who needed to talk.

“I wanted to be here to help them, communicate what was happening, create a bubble so they could vocalize and vent their fears,” she said. “I wanted to create that for them.”

Throughout the semester, Nimely and her fellow RAs communicated timely information, such as when food would be delivered and reminders to wear masks and use hand sanitizers. Even uplifting or funny messages were shared.

“We were using memes of the day to communicate because sometimes laughing through a struggle gives you a sense of comfort, knowing others are going through the same thing,” Nimely said.

“Being an RA really teaches you community building, how to create bonds among residents. With all the emotions going on, all the changes happening, it was important to be there for them.”

Nimely arrived back on campus for autumn semester three weeks before the other students to learn about her new role as an RM, where she manages a staff of 13 office assistants in Raney Hall. She admits at times learning her new role has been like drinking from a fire hose, but she’s getting the hang of it.

And what’s more important, the overall goal of her team and the Office of Student Life’s Residence Life remains the same.

“We’re all on a team together to create the best experience for students,” she said. “I don’t want to just focus solely on COVID because other aspects of students’ lives are changing as well, making new friends, what they have to do for class, changes in policies. So helping students take care of their mental wellness is the priority, giving them a game plan for everything we could encounter.”

Empowering families to close the education gap
Engineering a cleaner, healthier campus
Block O keeping its presence felt
Got voting questions? These students have answers.
Creating a welcoming environment
Students work together to inform campus planning
Student mentors help with iPad set up and tech support
Getting researchers back into their labs