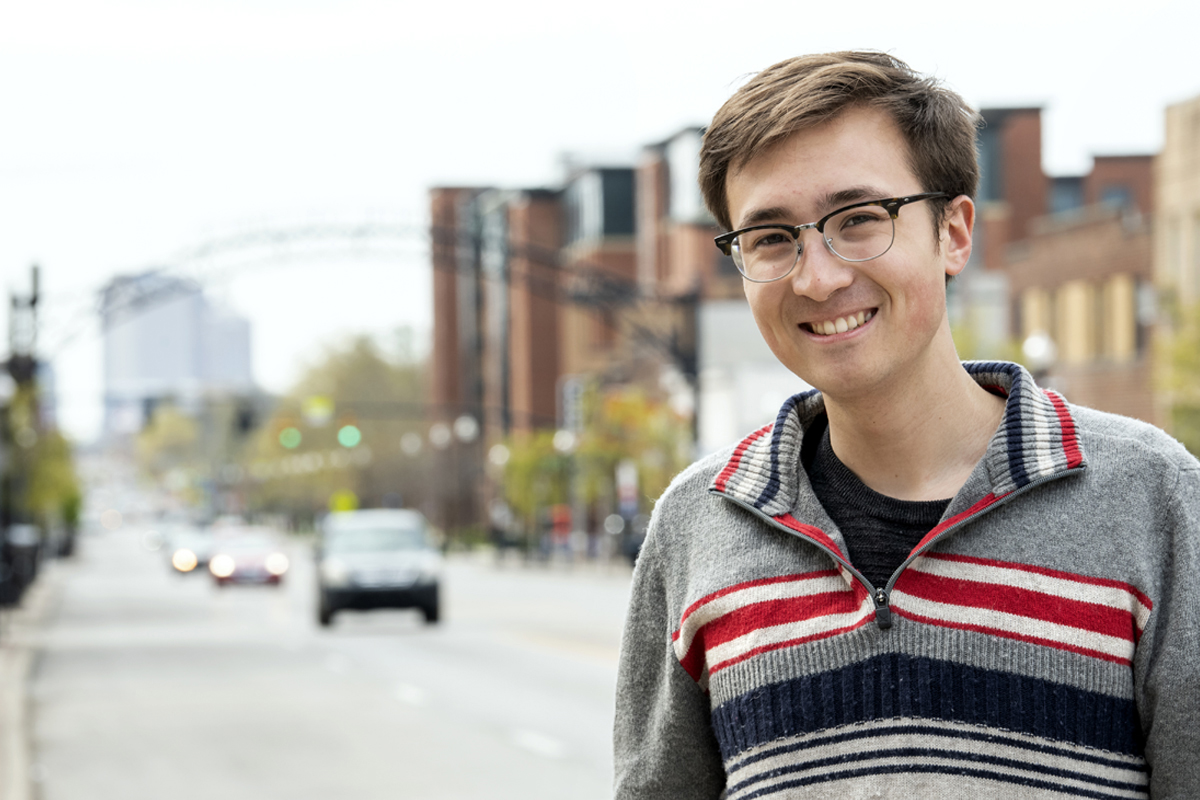 Ohio State industrial design major Kai McKinney is co-founder of Helm, a team of students that helped with the launch of Can't Stop Columbus.

On Sunday, March 15, the founders of the Ohio State student software company Helm were together working late into the night.

Earlier that evening, Jordan Davis ’11, director of SMART Columbus, sent a tweet proposing a virtual hackathon to help fight the numerous challenges COVID-19 was presenting Columbus. The tweet caught the eye of Helm team members who dove head-first into a big idea.

“We thought this is a way we can really help our community,” said Kai McKinney, an industrial design major and Helm co-founder.

“A lot of what we want to do with Helm is empower people to understand their own potential, the way they work and collaborate. Can’t Stop Columbus was the perfect effort for that.”

The Helm team includes juniors McKinney, Tommy Hillyer, a mathematics major, Austin Drabik-Weingard, a finance major, Brad Browning, a history major, and physics alumnus Will Matz ’19. Within hours of Davis’ tweet, Helm members had created a proposal for Can’t Stop Columbus that offered its web-based project sharing platform for the ideas that would be developed, creating a Slack channel for group communication and other structural elements..

It wasn’t exactly a fire drill, though. In fact, Helm’s members are comfortable developing solutions quickly as regular participants in hackathons like HackOHI/O, and make-a-thons, such as MakeOHI/O. They also won 2019 Ohio State competitions such as the Fisher College of Business’ BOSS competition (Best of Student Startups) and the Business Builders’ Idea Pitch Competition.

“We’ve been really involved in Ohio State’s hackathons, but there was so much energy it felt like it could be bigger than that,” Drabik-Weingard said. “We outlined our proposal and messaged Jordan. It just took off from there. There hasn’t been a lot of sleeping since it started.”

The next day, about 150 volunteers had joined the Slack channel Helm created. Within 72 hours, it was up to 500 volunteers. Can’t Stop Columbus now has more than 1,474 volunteers dedicating their time to 45 active projects.

A unifying moment, a lasting movement

A movement to equip front-liners with PPE

Those projects are delivering personal protective equipment to front-line workers, feeding those experiencing food insecurity, supporting small businesses and even addressing mental and emotional health issues. These are just a small part of the many projects that are dedicated to solving problems created by COVID-19.

Helm members continue to work on various Can’t Stop Columbus projects. McKinney has recently been working with Ohio State’s Julia Armstrong, program director of HackOHI/O, for a Can’t Stop U.S. toolkit that helps other cities model their own programs after Columbus’. Dayton has created one while cities like Austin, Boston and Cincinnati have expressed interest.

“It’s been humbling to be part of this,” McKinney said. “A lot of people from our community have dedicated their entire skillset and time to doing something that might not benefit them, but it’s helping other people and that’s remarkable.”

If you would like to volunteer for Can’t Stop Columbus, you can sign up at its website. The team’s website also offers many resources for those in need due to the challenges brought by COVID-19.